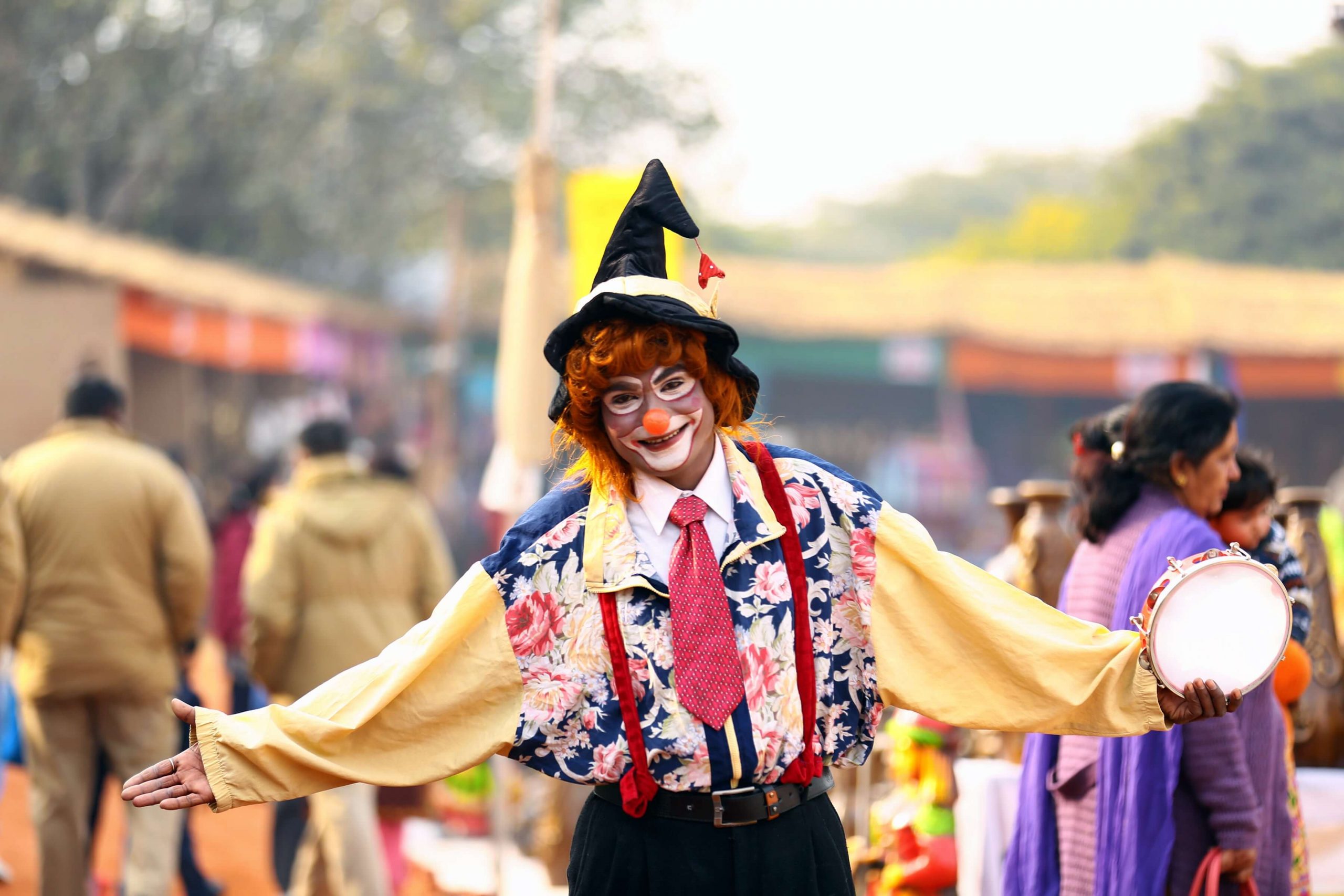 Learn all about the Clown Personality Type including a definition, characteristics, examples and how it relates to archetype personality types.

What is the Clown Personality? (Short Answer)

The Clown Personality is a personality type that is often characterized by excessive attention-seeking behavior and being highly animated, theatrical, and expressive.

They are usually very fun-loving people who enjoy making others laugh and tend to be very optimistic and extroverted.

However, they can also be quite impulsive and tend to be easily bored, which can lead to them seeking out new stimulation frequently.

The Clown archetype is associated with three major characteristics: making people laugh, making them cry, and wearing a mask that covers one’s own real emotions.

In literature and the theater, the Clown is almost always played by a man.

This may be due to the societal perception that expressing one’s feelings is a sign of weakness and inability to manage one’s emotions.

Because of this, a man is forced to wear a mask depicting a sobbing face.

An audience laughs when a Clown makes fun of something they can all relate to or plays out societal follies in order to make them laugh.

In general, the messages that a Clown sends through his or her humor are very serious and often critical of someone or something in society that isn’t being honest enough.

He may transgress borders of societal approval because of the mask he wears, which allows him to express what others would want to do or say.

Court Jester or Fool is the Clown in a regal context.

Because no one can take a fool seriously on a physical level, he is granted access to the most powerful of circles.

While entertaining the king with outrageous behavior, the Fool is actually communicating messages that the king trusts.

The Dummling, a fairy tale character who, while being simple-minded, behaves with a good heart and is frequently rewarded for it, is closely related to the Fool.

In modern movies, characters like Forrest Gump and Nurse Betty show this part of the archetype, which doesn’t give wisdom but encourages people to be kind and simple in their lives.

The shadow side of the Clown or Fool is cruel personal mockery or betrayal, especially when it comes from someone in the inner circle.

Consider your use of humor when assessing your connection to this archetype.

Everyone is capable of joking, so you’re searching for a pattern of conduct that’s critical to your own safety and well-being.

Take some time to consider whether or not “clowning” is the only way to convey your feelings.

Consider if you, like the Fool, bring truth into closed groups or minds.

There are many different types of Clown personalities. Here are a few of the most common types:

The Court Jester Personality is a type of personality that tends to be charming, witty, and intelligent.

They often use humor as a way to deflect attention from their true intentions.

Court Jesters are often known for being the life of the party and they enjoy making people laugh.

Court jesters are typically very quick thinkers and they often use their wit to get out of trouble.

They tend to be popular with others and they often have many friends.

While court jesters may seem carefree on the surface, they actually have a very calculating nature.

They are always looking for ways to increase their power and influence.

The Fool personality is a curious one.

They’re always looking for new opportunities and they have an easy time making friends.

They like to take risks, but they also know how to have fun.

They’re often optimistic and see the best in people (even when others don’t).

At the same time, Fools can be impulsive and not think things through.

They can also be naive and believe everything they hear.

This can lead to them getting into trouble or make them easy targets for scams.

Overall, Fools are upbeat, positive people who are always looking for a good time.

Dummling Personality is a term used to describe people who are easily fooled or taken advantage of.

They’re often described as being sweet and naive, and they tend to trust others too easily.

They’re also sometimes seen as being slow-witted or gullible.

There are some common traits that are often associated with the Dummling personality type.

These include being charming, sociable and fun-loving.

However, they can also be lazy, irresponsible and superficial.

They may also tend to avoid taking on too much responsibility or challenging tasks.

Ultimately, each person’s individual experiences and traits will shape their personality.

Read on to learn more about the key Clown personality characteristics:

1. They are open extroverted

When it comes to openness, clowns frequently come out on top, indicating that they are naturally inquisitive, inventive, and open to new experiences.

They also tend to have a high level of extraversion, which means that they depend on external stimuli, such as people or interesting circumstances, to make them happy.

2. They have a sense of humor

There are many different types of senses of humor, and which one someone has depends on their personality.

Some people are naturally funny and make others laugh easily.

This type of person is often confident and outgoing, and may use humor as a way to defuse tense situations or to get attention.

Other people have a more subtle sense of humor that they use to display their intelligence or wit.

These people usually take time to warm up to new people or situations, but once they do, they can be very funny.

3. They are creative and expressive

Creative and expressive people have a vivid imagination and are often drawn to the arts.

They are typically very sensitive and intuitive, and have a deep appreciation for beauty in all forms.

They are often quite imaginative and may enjoy daydreaming or fantasizing about different scenarios.

They typically have a lot of energy and enthusiasm, and tend to be quite social people.

4. They are outgoing and social

Outgoing and social personalities are people who enjoy being around others and derive satisfaction from interacting with others.

They typically have an easy time making friends and feel most comfortable when they are in the company of others.

They generally like to be active and engaged in their surroundings, and they get a lot of pleasure from socializing and being around people.

Examples of the Clown Personality

Here are some examples of the Clown Personality in popular culture and literature: