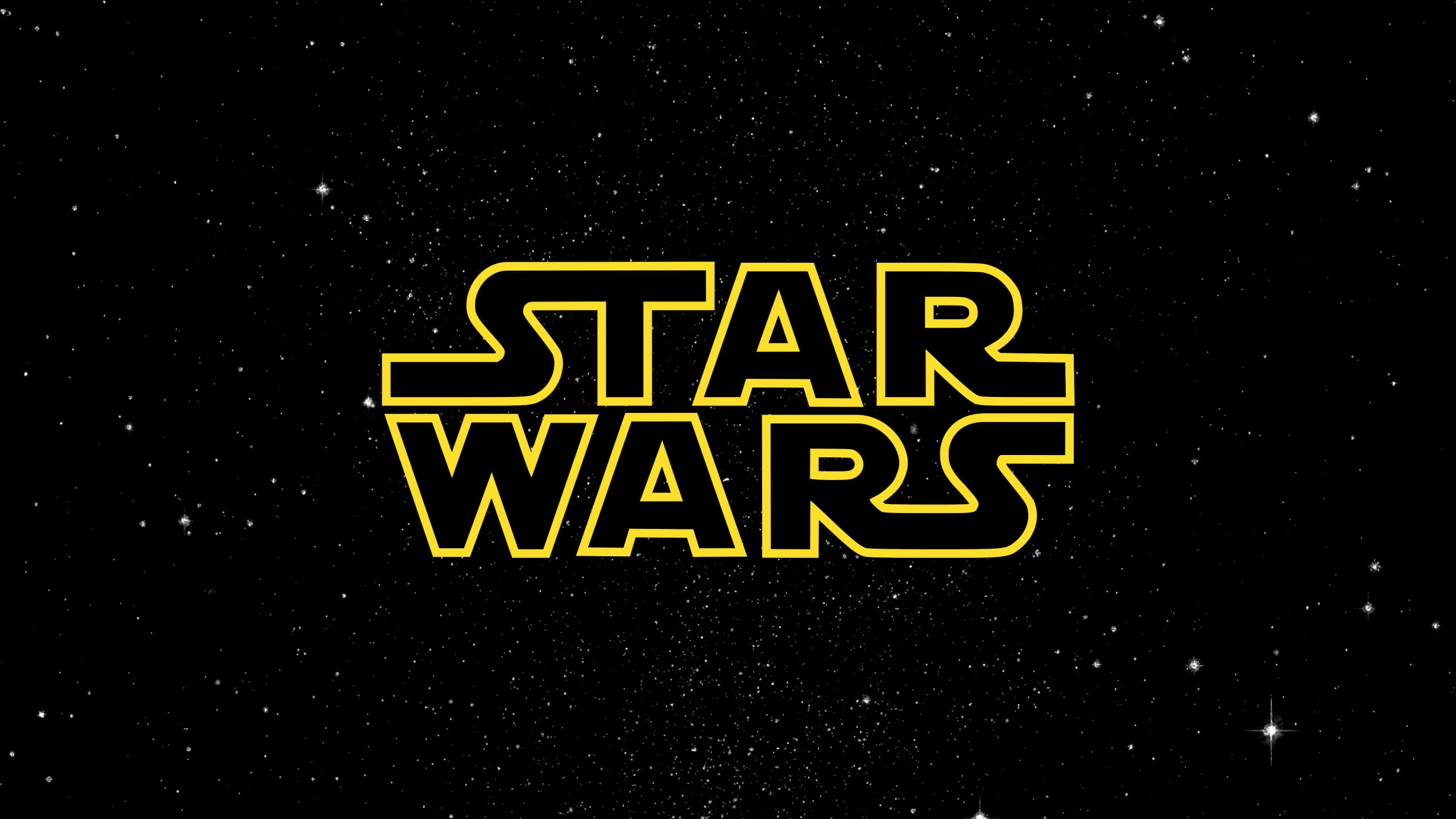 In this article, you will learn all about the different character personality archetypes found in a galaxy far far away (aka Star Wars archetypes).

The Star Wars series of movies is an excellent example of the use of archetypes in storytelling on film.

Thanks at least in part to the influence of American professor of literature Joseph Campbell and his ideas about the monomyth, or Hero’s Journey, on filmmaker George Lucas.

Campbell himself was influenced by the world of psychoanalyst Dr Carl Jung, who identified a whole range of archetypes passed down through cultures from ancient times and which, as a result, are instantly familiar to those in modern society.

An exploration of these ancient archetypes as seen in the characters in Lucas’s Star Wars series helps to understand the easy and enduring appeal of the films with audiences around the world over the last forty years.

Here are the Star Wars archetypes as they relate to some of the main characters:

Perhaps the most easily recognisable archetype of the series is that of the hero in the form of central character Luke Skywalker, the central hero of the Star Wars films and the fictional universe in which they are situated.

The archetypal hero is one born with a destiny to fulfil – usually to defeat the forces of evil and restore peace, democracy and justice to society.

He may or may not be of noble birth, but he must possess certain heroic qualities, such as courage, determination, endurance, physical strength and a willingness to place themselves on the line for the cause in which they believe. We see all of these qualities in Luke Skywalker.

It is also significant that Luke wears white – the colour representative of the forces of goodness, innocence, truth and purity rather than darkness and evil. 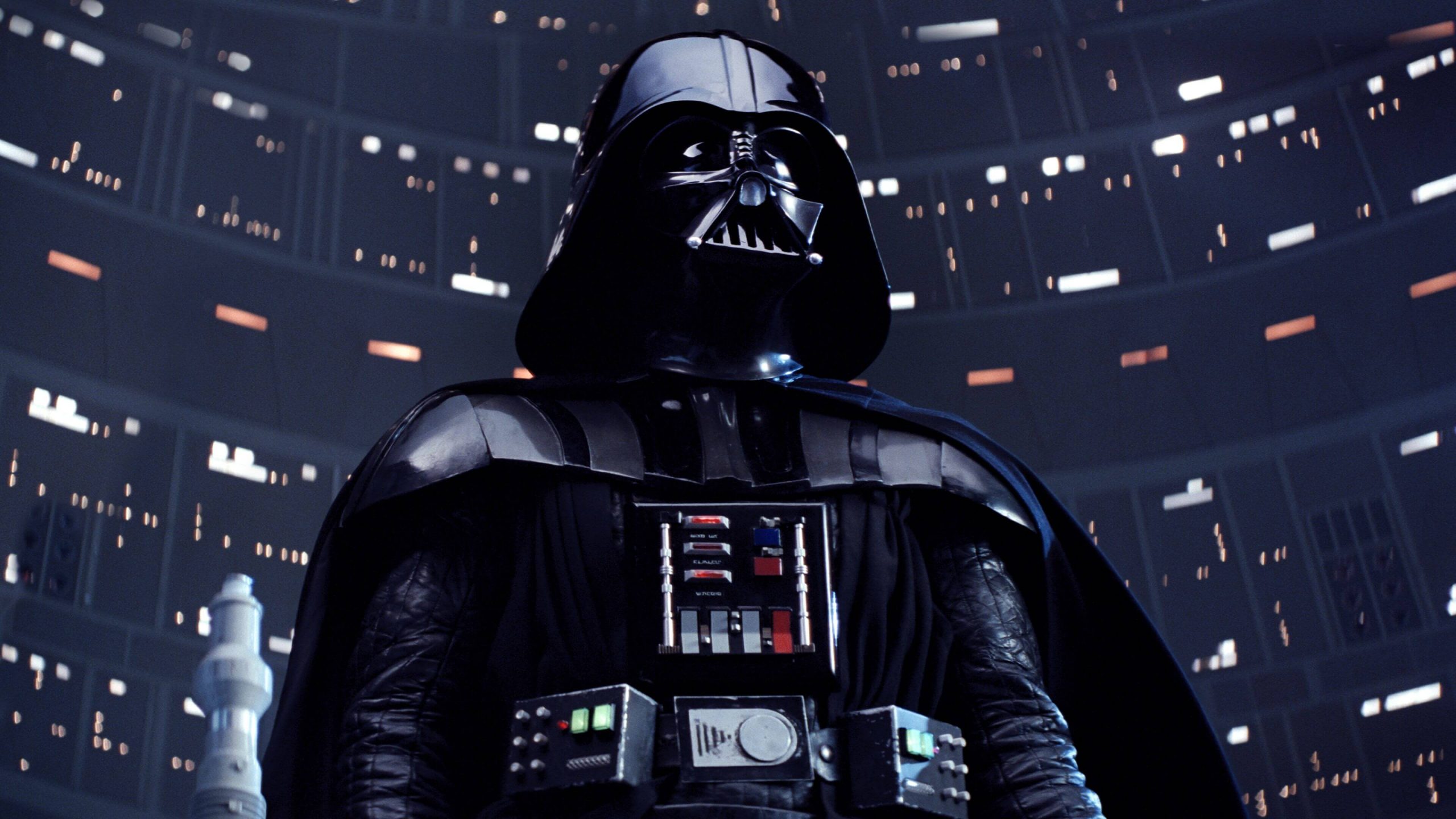 Darth Vader is often cited as the ultimate archetypal villain in the film genre.

Wearing black – the colour representative of darkness, dishonesty, evil and impurity – Darth is the Shadow version of Luke’s hero character.

Damaged by events of the past, he is fuelled by an inner rage at the world and turns this into a determination to act for the cause of evil.

He has the many of the same qualities of the hero character – physical strength, endurance, determination, commitment to a cause – but where the hero uses these qualities for good the villain in the form of Darth uses these for evil ends.

This similarity between the hero and villain is often a theme in storytelling.

Darth, however, differs from Luke because he is sinister, intelligent and has an advantage over Luke in the form of experience, which means he understands the force.

However, despite it all he is not purely evil and, by the end of his story, he has realised his mistakes and attempted to atone for them because of his connection with his son. 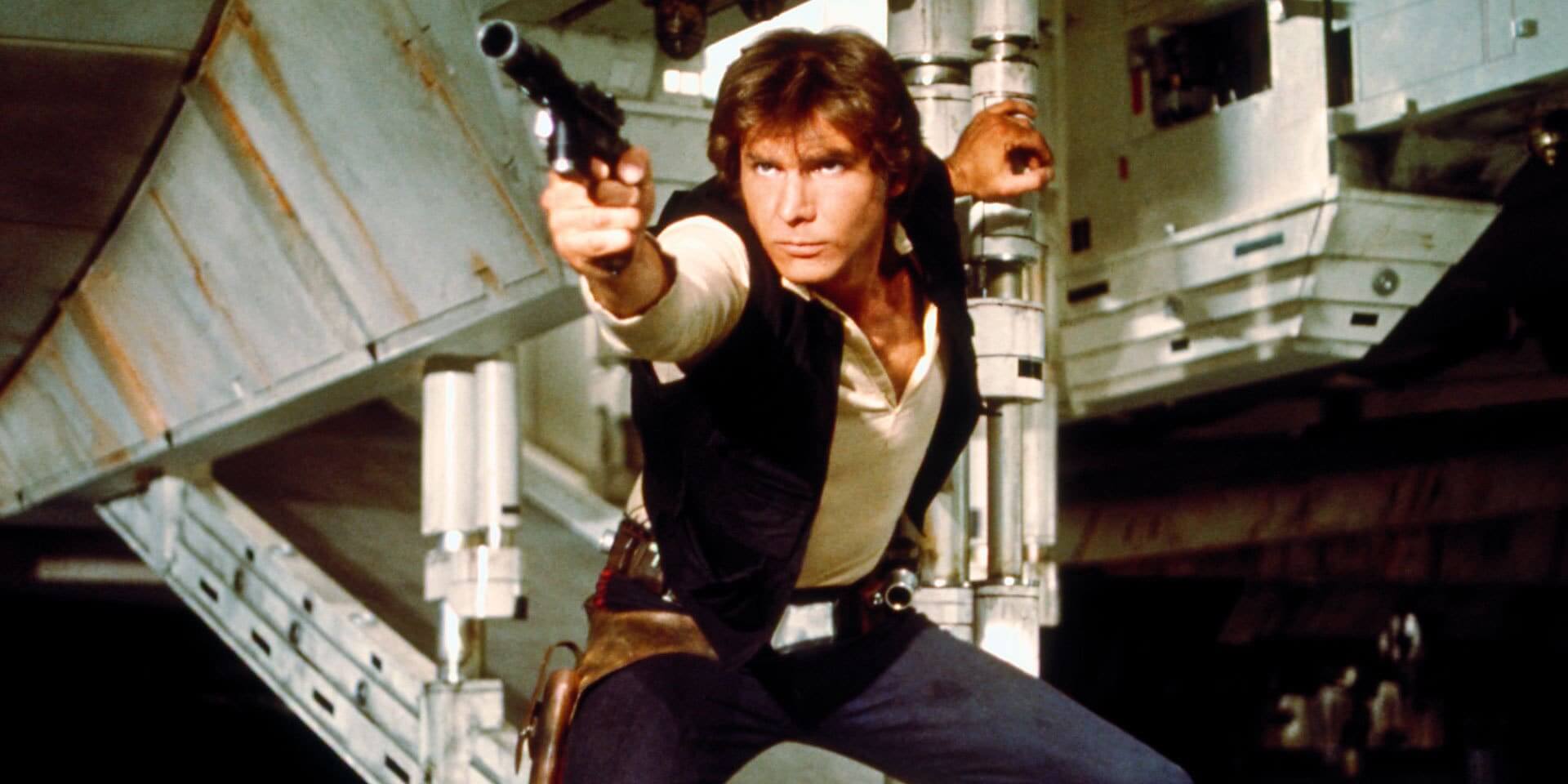 Han Solo is the archetypal outlaw of the Star Wars series and, in this role, becomes a form of anti-hero.

When we first meet Han he is entirely self-interested and a classic charming rogue.

He is willing to help Luke in his cause, but only where this tallies with his own interests rather than because he is actually committed to the cause which Luke espouses.

As an archetypal outlaw he is all too ready to break the rules in order to achieve his goals, something which proves extremely useful to the far more straight laced Luke on numerous occasions.

However, when the going gets too tough Han’s lack of commitment to the cause also means he is willing to bail on Luke. However, as time goes by we see Han begin to change, influenced by Luke and others around him.

He still retains his roguish and rule-breaking nature throughout, something which serves to cast the heroic Luke in an even brighter light, but he gradually finds commitment to the cause.

As he does so he becomes the anti-hero archetype too – one who acts in a heroic manner but not in a conventional way. 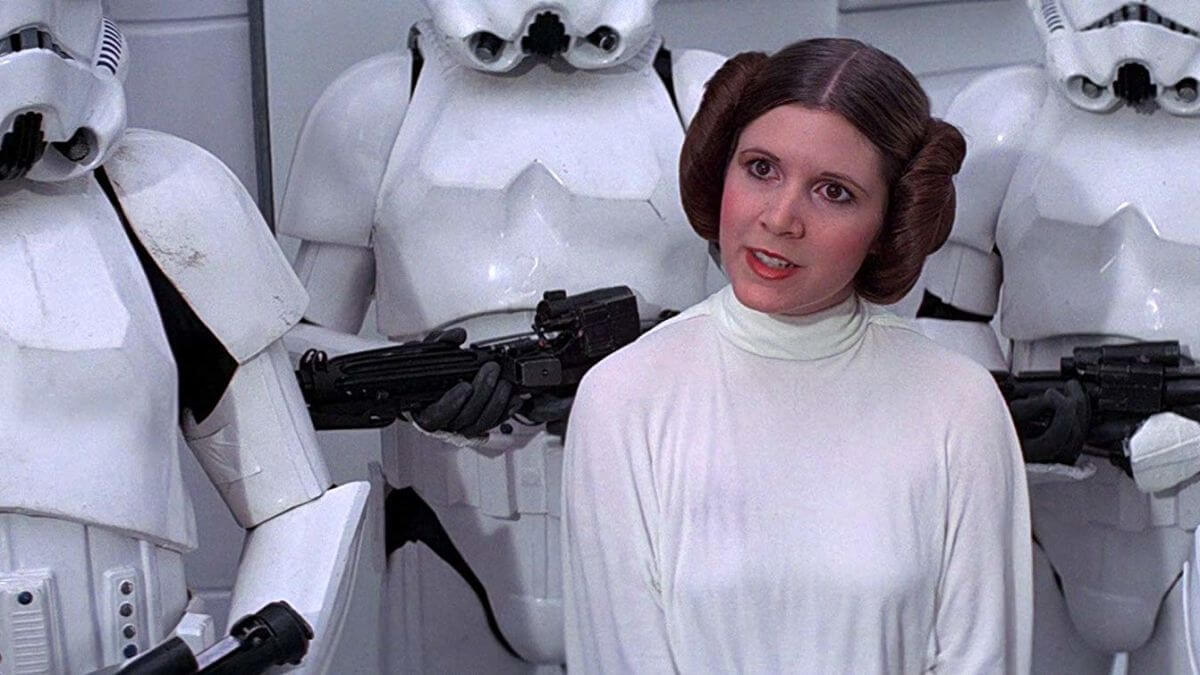 Princess Leia is a harder character to define in terms of archetype as she changes more than any other character over the course of the series.

In the first film she appears to be the archetypal damsel in distress – the female character who needs to be rescued from the forces of evil by the male protagonists of the story who, at least on the surface, are stronger than her in every way.

However, this archetype does not define Leia throughout the rest of the series, when she develops into a strong military leader and female warrior, proving herself just as heroic as her male counterparts when it comes to fighting for the cause of good.

In this guise she perhaps best fits the archetype of female warrior – brave, determined, adventurous, willing to fight on the front line in battle and prepared to risk all for the things she believes in. 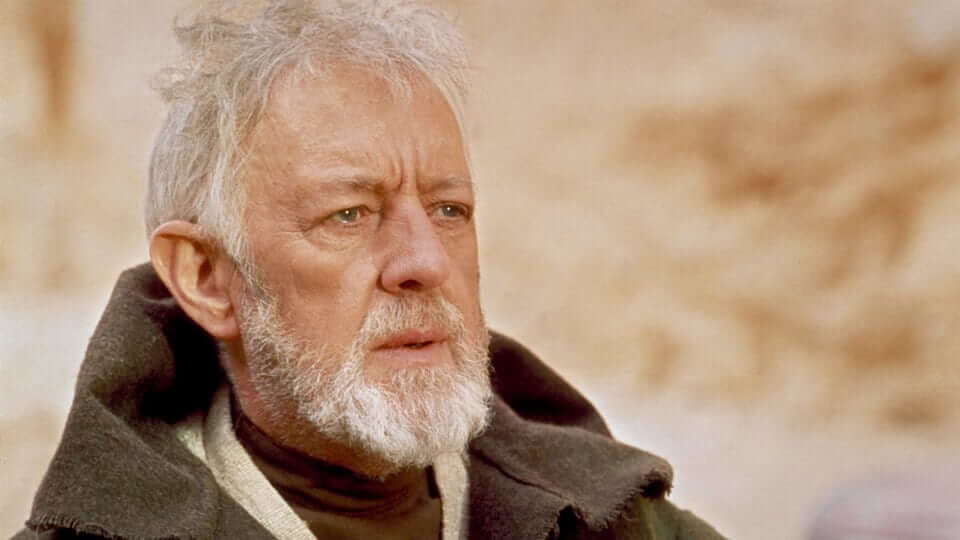 Obi-Wan Kenobi fulfils the archetype of mentor to Luke in particular in the first three movies of the series.

The advice and guidance which Obi-Wan, as mentor, has to offer Luke is based on his own similar heroic journey from the past, something common to the archetype.

Obi-Wan guides Luke on his inner journey to acceptance of who he is and what he has to offer the Universe, including helping him on his path to becoming a Jedi.

He does so by employing his extensive knowledge and skills as well as acting as a moral guide for Luke.

Like many mentors throughout culture, he is unable to see the end of the journey through which he has guided the hero, this being something which they must accomplish on their own in order to fulfil their destiny. 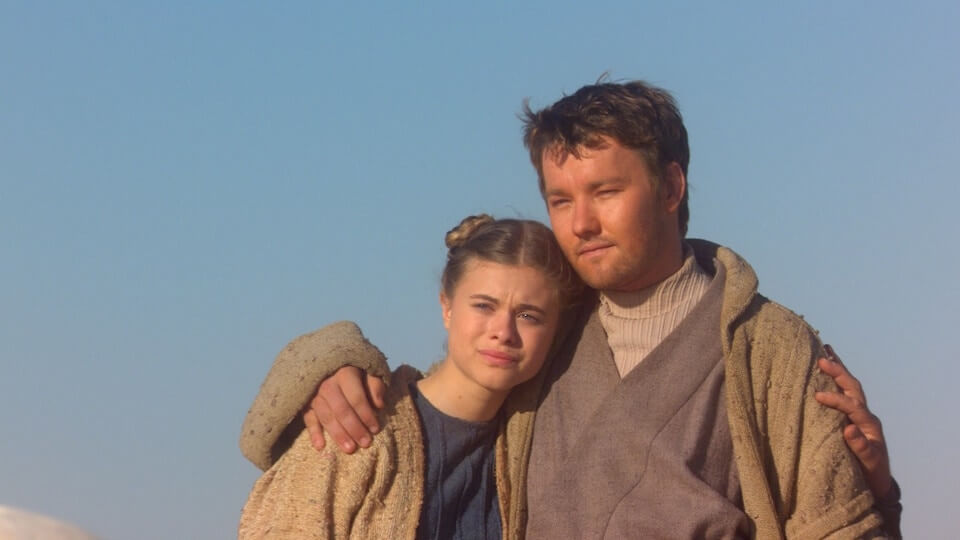 Unlike the archetypal mentor, the false mentor is a character who provides incorrect guidance or advice to the hero.

This may or may not be for evil reasons – they may simply be innocently mistaken but genuine in their motivations – but whatever the reasons the guidance they give is false.

In the Star Wars series Luke’s Uncle Owen and Aunt Beru are decent individuals who care about their nephew and provide guidance with good intentions, but in doing so they are providing false guidance which could prevent the hero from achieving his destiny.

Unfortunately for them they go on to to pay the consequences of their false guidance by losing their lives. 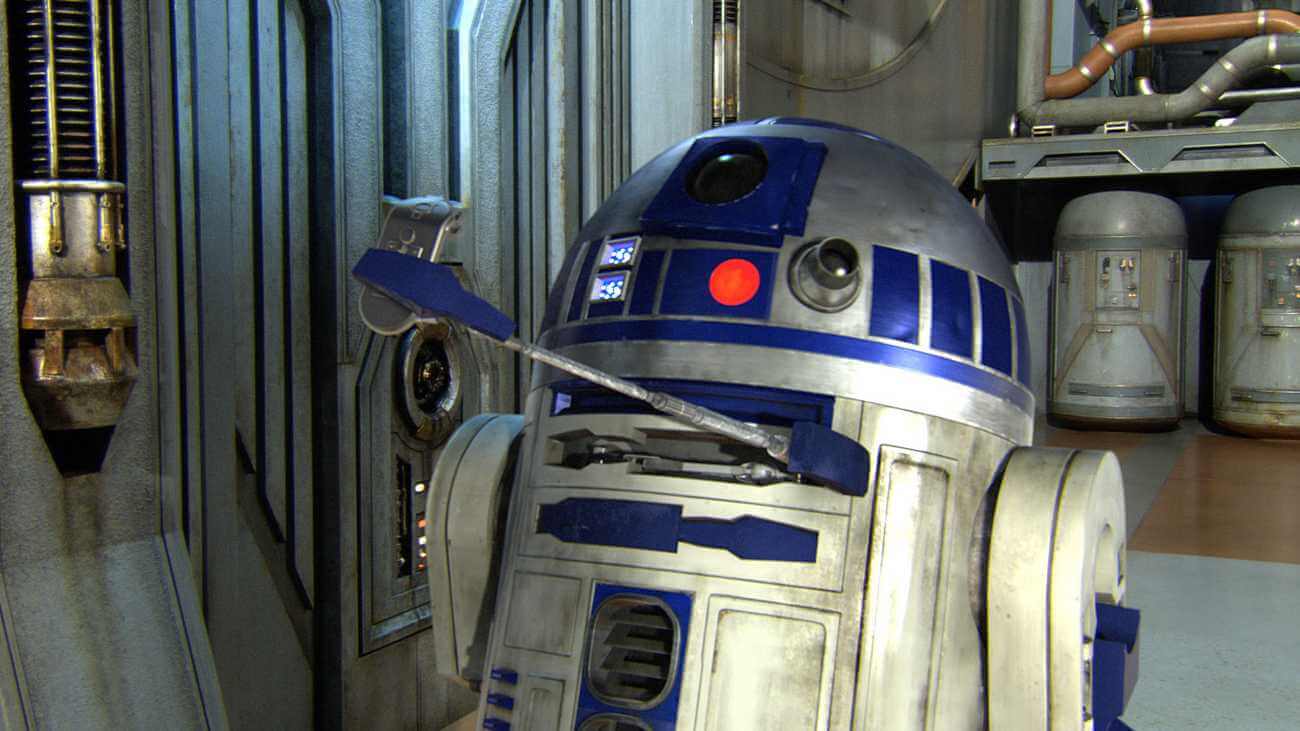 The archetypal Herald is a character who appears at the beginning of the hero’s journey and brings the ‘Call to Adventure’, a term coined by the aforementioned Joseph Campbell.

The ‘Call to Adventure’ is the message, signal or similar which tells the hero of the journey, quest or task which they must accomplish in order to fulfil their destiny.

In the first Star Wars film Princess Leia’s plea for help is played by the herald, R2D2, and it is this which sets the hero Luke off on his adventure.

Characters can, of course, fulfil more than one archetype in a story and we will come back to R2D2 later on. 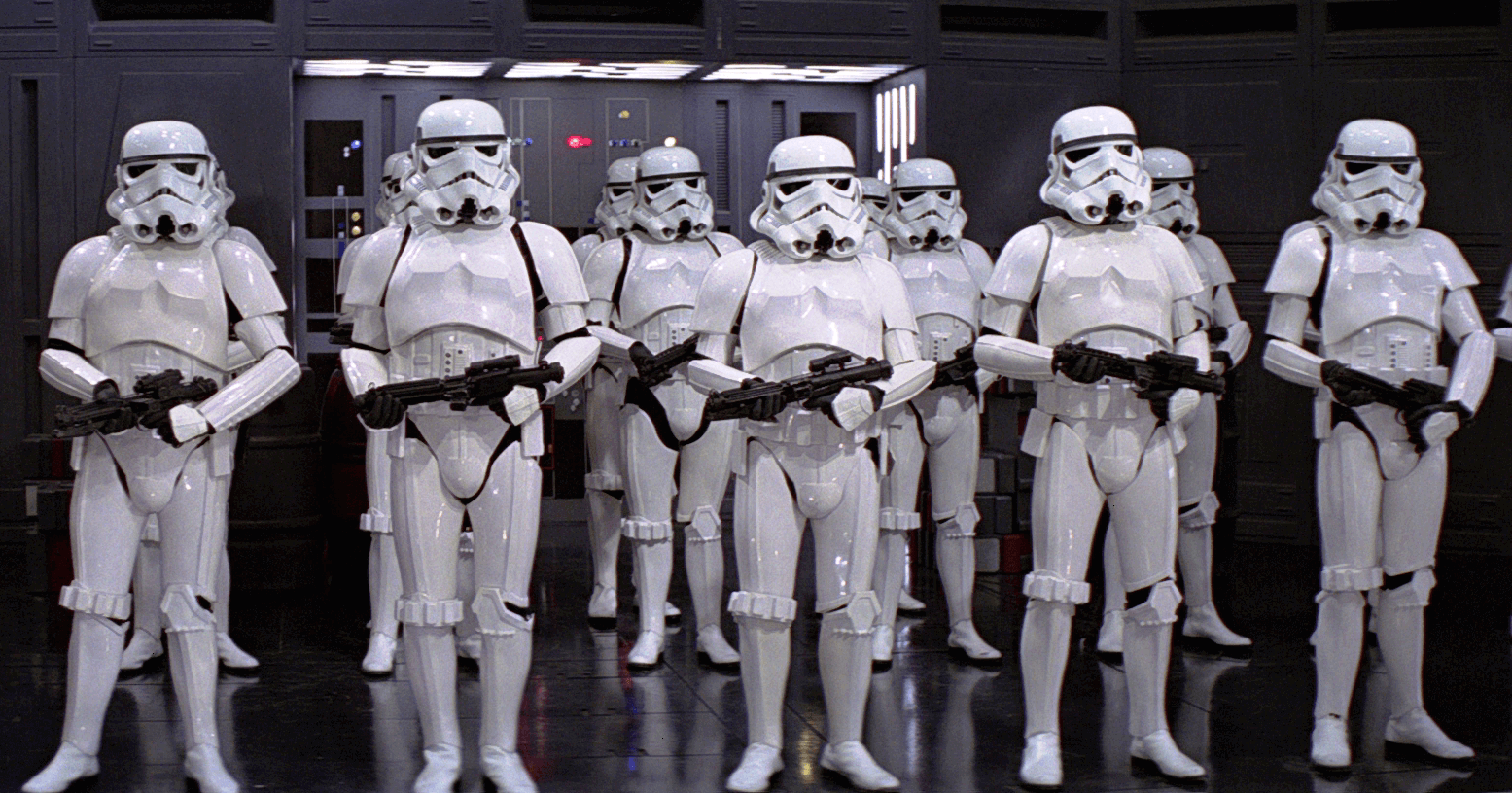 The archetypal threshold guardian is a character/set of characters who stands in the way of the hero making progress on their journey or quest.

In other words, they act as guards at the threshold of a key point in the hero’s journey and hinder their progress along the way, acting as a test which they must pass if they are to progress further.

There are a number of examples of these archetypes in the Star Wars series, but here we will consider two of them.

Firstly, Jabba the Hutt is a powerful crime lord in the Star Wars galaxy who threatens the freedom and life of the central protagonists and whom Luke must overcome in order to progress further in his adventure.

Secondly, the famed Stormstroopers must be overcome at many points in the series, with them slowing or redirecting the progress of the main protagonists but never completely stopping them. 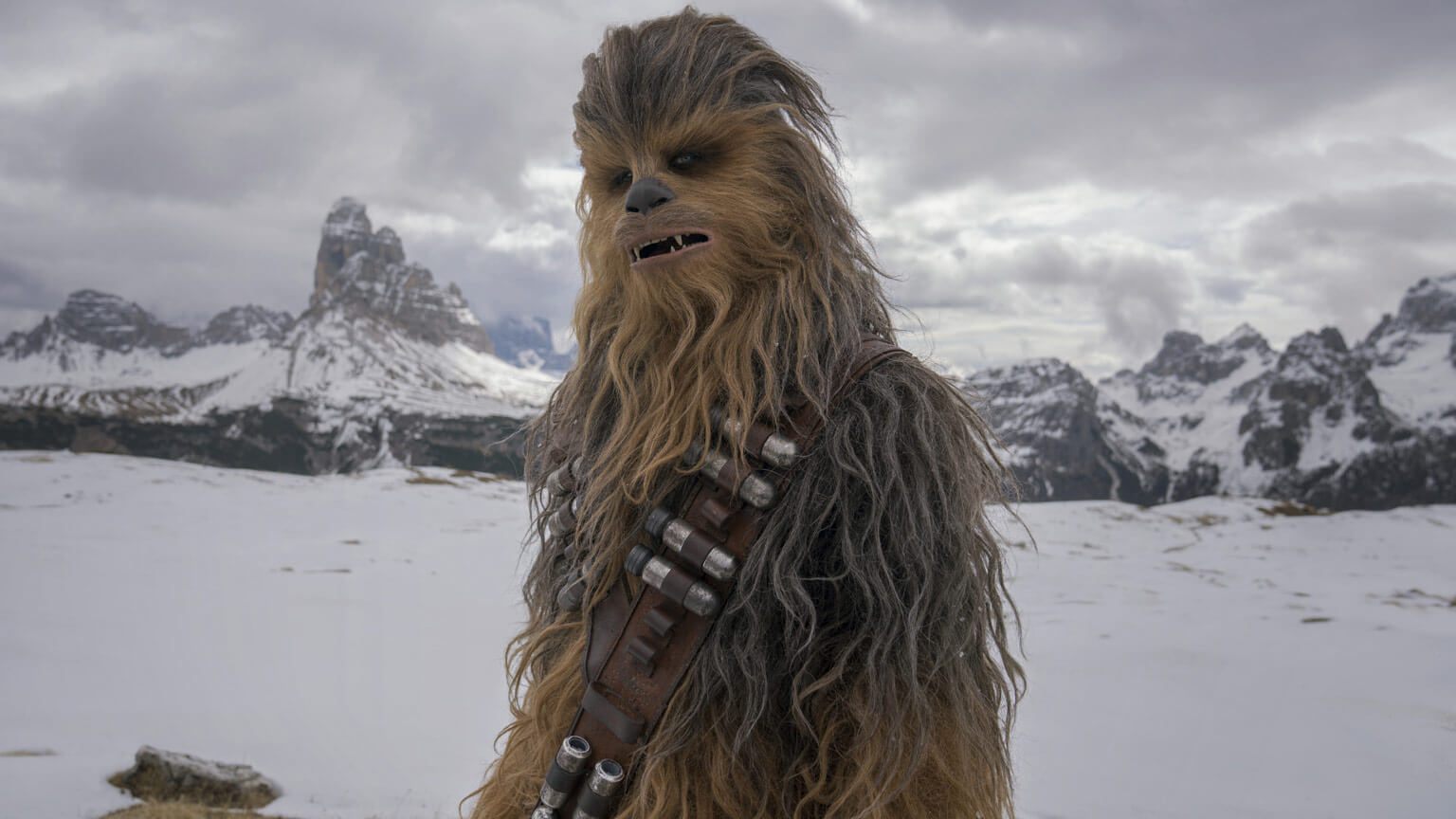 A common archetype in Disney films, the friendly beast is most commonly an animal archetype and, though not traditionally so in the Star Wars films, Chewbacca fits the same mould.

The archetype symbolically demonstrates that nature is on the side of good.

Whilst not a central character who is essential to the story, the friendly beast that is Chewbacca enriches the story through his presence through the humour he brings to a dark tale and the loyalty he displays to the central characters.

The friendly beast usually possesses some traits that the central characters do not – for example, Chewbacca is larger and has a greater physical strength which comes in handy for his companions on many occasions.

He is also sensitive and compassionate, something unexpected given his appearance, and his qualities add a new dimension to the story which would not otherwise be present. 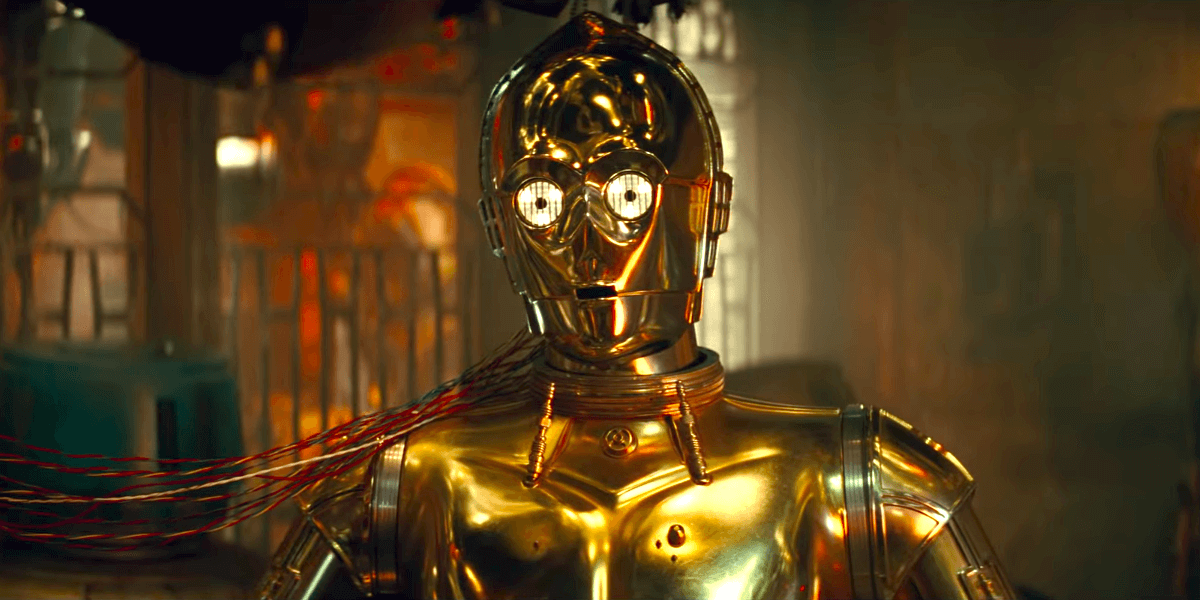 The most naive and child-like of all the characters in the Star Wars universe, C-3PO meets the child archetype in all ways except physically.

Despite his programmed computer intelligence, he does not understand the world in the way an adult does – his ‘brain’ does not make adult connections but instead processes information more like a child’s would.

He sees things in simple black and white rather than shades of grey.

His droid form makes him the eternal child, one who displays petulance, a self-centred nature, throws tantrums and complains when things do not go his way but who is ultimately good at heart and fiercely loyal to those he cares for. 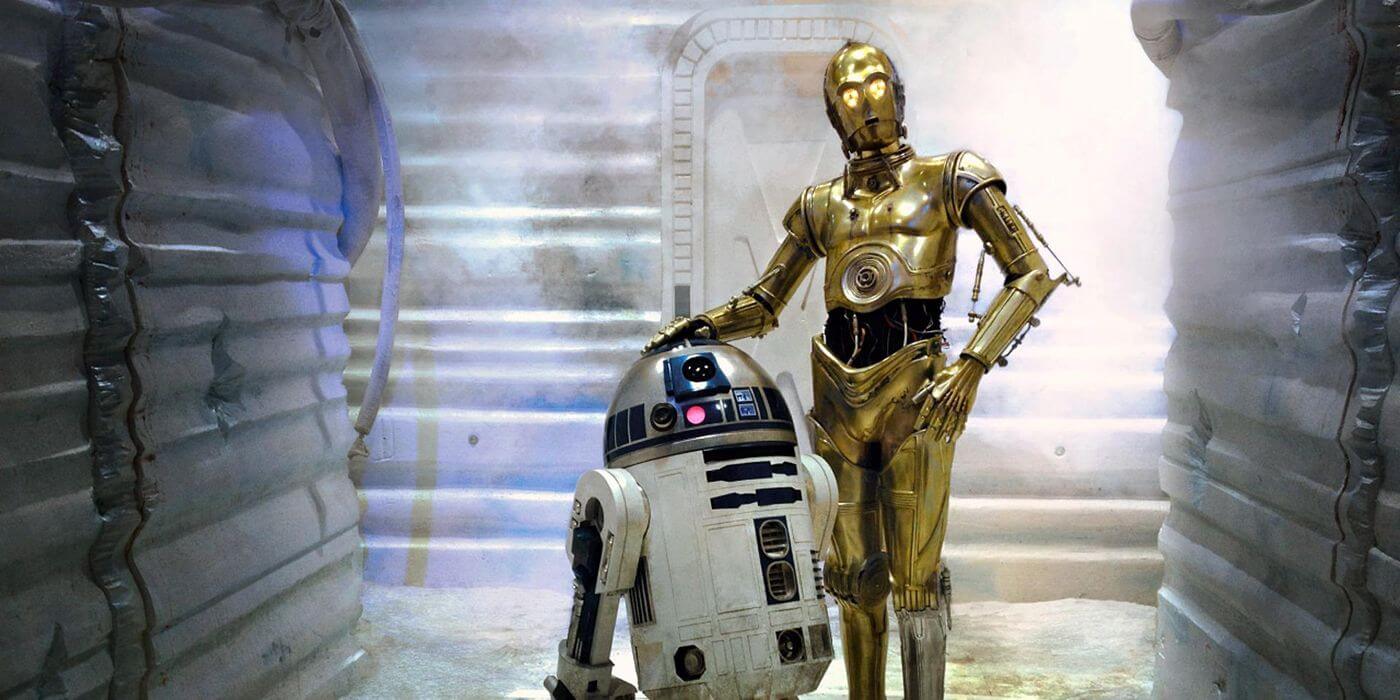 Both C-3PO and R2D2 fulfil multiple archetypes in the Star Wars series.

They act as archetypal ‘Fools’, the comedic foils for the far more serious characters and action going on around them who bring light relief to the viewer amidst the relentless action elsewhere.

Where others show courage and endurance they run and hide, but they do so in a funny manner which only endears them to the viewer.

As such they are also the archetypal underdogs, with everything seemingly against them and, in the case of C-3PO, everything always seeming to go wrong for him while R2D2 comes out unscathed.

Despite this they always make it through as the classic archetypal underdog does.

They are also archetypal loyal companions, forever at the side of the protagonists and willing to do whatever is needed by them.

The famous character of Yoda is another in the Star Wars series who embodies a number of different archetypes within one character.

On initial examination Yoda seems like the classic archetypal wise old man archetype, the older individual who serves the purpose of acting as an advisor and teacher to the central hero of the story. This is certainly true of Yoda but it is by no means all that he embodies.

In his first appearance Yoda acts as an archetypal trickster by tricking Luke into believing he is something he is not – a senile old swamp creature with nothing to offer him rather than the creature of vital importance which he actually represents.

It then becomes apparent that Yoda is also acting in the guise of an archetypal threshold guardian, albeit one with good rather than bad intentions, in his refusal to disclose his wisdom and secrets to the hero until they have proven themselves worthy of such information.

As such Luke must pass Yoda’s ‘test’ in order to secure the information he needs to progress further on his ‘hero’s journey’ – the information about his family and about the Force.

Finally, Yoda is also an archetypal oracle – one who can see past the present and into the future, with all the possibilities which it holds and how actions in the present may impact on this.