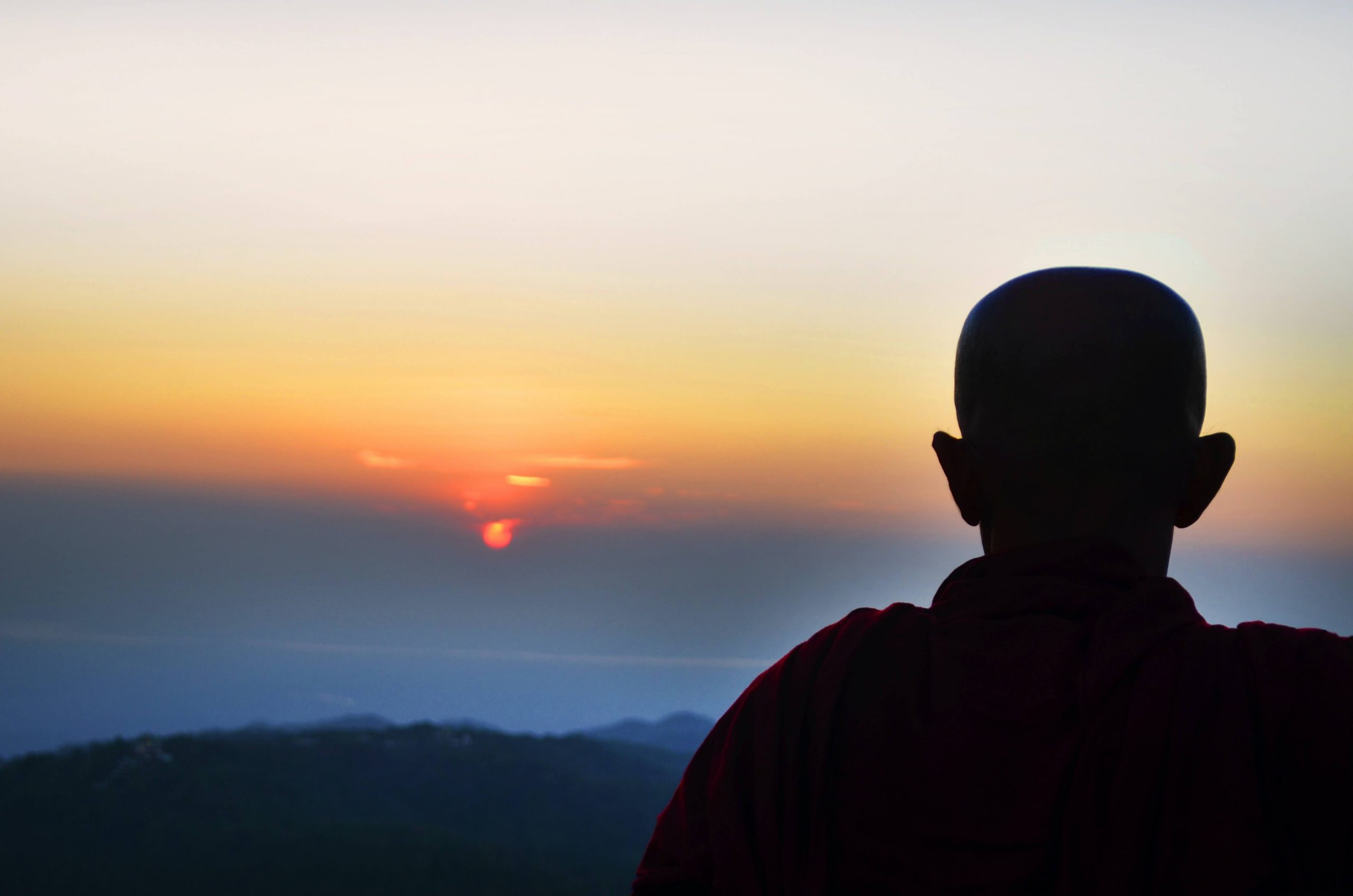 Learn all about the Monk/Nun Personality Type including a definition, characteristics, examples and how it relates to archetype personality types.

What is the Monk/Nun Personality? (Short Answer)

The Monk/Nuns are introspective and focused on their spiritual practice.

They are self-sufficient, serene, and compassionate.

They are often content with their own company and enjoy solitary activities.

The positive characteristics of this archetype are very obvious: spiritual intensity, commitment, perseverance, tenacity, and in some cases wisdom.

On the shadow side, a religious recluse’s role could be viewed as removed from the real world, overly pious, and even privileged in the sense of not having to worry about making a living or raising a family.

However, whether draining swamps and planting vineyards in medieval Europe, working the rice fields in Asia, building monasteries, teaching, or copying and preserving texts, monks have always been extremely hardworking and involved in real-world activities.

Personality traits associated with the Monk/Nun include being solitary, diligent, and dedicated to a spiritual path or to any significant accomplishment that necessitates intense concentration.

In this sense, authors and businesspeople are just as capable of carrying the Monk/Nun as spiritual adepts.

The Celibate devotes his or her time and attention only to work or spiritual pursuits.

However, as several Tibetan lamas, Yogis, and Islamic scholars would attest, one does not have to remain celibate to be a Monk, even a religious one.

In the 12th century, Abelard and Heloise, a Monk and a Nun who fell in love and broke their vows of chastity because of their intense feelings for one another.

Both were superior in their fields–Abelard as a lecturer, debater, and philosopher, and Heloise as a radical prioress and convent founder–and their passion, despite causing them great suffering, does not appear to have harmed their spiritual work.

There are many different types of Monk/Nun personalities. Here are a few of the most common types:

A Celibate is someone who chooses not to engage in sexual activity, either for religious or personal reasons.

While celibacy used to be largely associated with religious figures like priests and nuns, more and more people are choosing to live a celibate lifestyle for a variety of reasons.

Celibacy can be a very positive choice for some people.

It allows them to focus on other aspects of their life, such as their career, hobbies, or relationships with friends and family.

For others, it can be a way to avoid the heartache and drama that comes with romantic relationships.

Read on to learn more about the key Monk/Nun personality characteristics:

1. They are disciplined and have a great sense of self-control

They’re often able to stay calm in difficult or challenging situations, and have a strong sense of self-awareness.

Additionally, people with these personality types tend to be successful in various fields and undertakings – they just need to be aware of their own capabilities and limits.

They have the ability to stick to a schedule or plan and maintain good habits even when they are under stress.

This type of person is also able to resist temptation and make decisions based on logical reasoning rather than impulse.

They believe that self-control is essential for achieving one’s goals and living a happy, productive life.

For them, impulsivity is dangerous and leads to unhealthy choices or actions.

2. They are patient, often waiting years or even decades to achieve their goals

This trait refers to the ability to keep going in the face of difficulty or setbacks.

People with this quality are not easily discouraged and are able to stay focused on their goals for long periods of time.

They tend not to be swayed by distractions or temptations, and will stick with their plans even when things get tough.

Monks don’t give up easily, and they know that if they keep working hard, they’ll eventually reach their goals.

They’re happy to take their time and make sure everything is perfect before moving forward.

3. They are compassionate and generous with their time and resources

Monks are always looking to help others in need.

They are the type of person who will go out of their way to make sure that everyone around them is comfortable and happy.

They are big-hearted and always ready to lend a hand, whether it’s picking up a shift at work or donating to a charity.

This personality type might also volunteer their time regularly to help those less fortunate.

Monks live with an open heart and want to make the world a better place.

While they might not be the life of the party, they are loyal friends who will stick by you through thick and thin.

You can always count on them for some good advice or a shoulder to cry on.

4. They have strong convictions and aren’t afraid to stand up for what they believe in

Monks are not afraid to speak their mind or to confront someone who may disagree with them, because they are so in line with what they believe in.

This type of person is often seen as a leader, because they’re not afraid to take charge and stand up for what they believe in.

While some people may see them as being bossy or pushy, those close to them know that they’re just passionate about what they believe in and aren’t afraid to go after what they want.

5. They live a simple life, free from material possessions and distractions

A simple life is one where the individual focuses on the essentials and eliminates or reduces all other distractions.

For some, this might mean living a minimalist lifestyle and getting rid of most material possessions.

For others, it might mean simplifying their workload, diet, or social life.

The goal is to reduce stress and focus on what’s truly important, that being spirituality or family.

This can be incredibly freeing and allow you to live a more contented life without all the clutter and noise that often comes with having too many things.

Examples of the Monk/Nun Personality

Here are some examples of the Monk/Nun Personality in popular culture and literature: