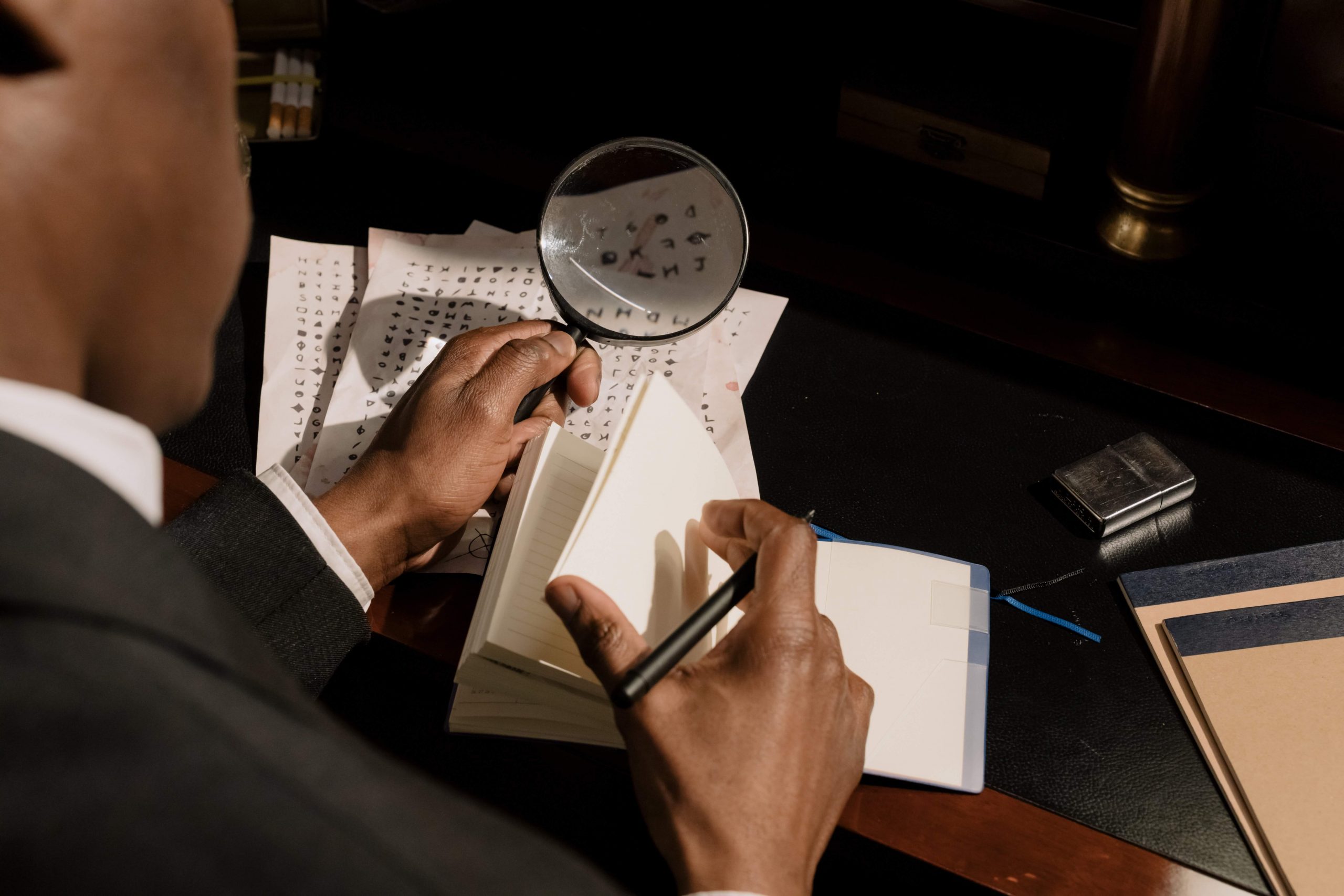 Learn all about the Detective Personality Type including a definition, characteristics, examples and how it relates to archetype personality types.

What is the Detective Personality? (Short Answer)

The detective personality is a term used to describe people who are curious, investigative, and analytical.

They like to ask questions and figure out the facts. They are logical and objective, and they often enjoy problem-solving.

People with this personality type are typically good at analyzing data and coming to conclusions.

They are also usually very observant, and they may be able to see things that others miss.

Detective types usually make good detectives or researchers because of their natural inclination to question everything and probe for answers.

Positive traits of Detectives include the capacity to gather information that helps solve crimes and safeguard the public.

To solve crimes, detectives rely on their keen senses of observation and highly developed intuition.

While the Detective is well-known and well-respected, the empowered Spy is more closely associated with the covert and often illegal acquisition of sensitive information about politics, business, or national security, especially its modern counterpart, the police Profiler.

The way we see spies varies depending on whose side they’re on.

Venom, deceit, and selling out to the highest bidder are all manifestations of the archetypal dark sides of these figures.

The shadow Detective is beckoning parents who “spy” on their children with the best of intentions, such as discovering whether or not they’ve been involved in any sex or drug activities.

There are many different types of Detective personalities. Here are a few of the most common types:

The Spy personality is one that enjoys gaining knowledge and understanding through subterfuge and intriguing questions.

They enjoy exploring the world around them, uncovering secrets and hidden knowledge.

Spies are natural sleuths, they have an inquisitive nature and sharp mind that helps them piece together clues to solve mysteries.

They’re often charming and likeable, making it easy for them to get close to people and coax information from them.

While some spies use their skills for nefarious purposes, many others use their talents for good.

For example, private investigators or detectives often have the spy personality.

They use their observational skills and cunning wit to solve crimes or find missing persons.

The Double Agent Personality is a term used to describe people who present themselves as one way to others, but behave very differently behind closed doors.

This type of personality is often seen in people who are constantly trying to please others and make them happy, even if it means sacrificing their own needs and wants.

They feel like they need to be two different people in order to survive in the world, and this can be very emotionally draining.

People with this type of personality are often good listeners and have a strong sense of empathy, which makes them great friends and partners.

However, they also need to learn how to set boundaries for themselves and be okay with saying “no” every once in a while.

The sleuth personality is someone who is curious and likes to figure things out.

They are often detectives or researchers, and enjoy getting to the bottom of things.

They are also very analytical and observant, and like to gather information before making a decision.

Sleuths are often independent people who don’t need a lot of social stimulation.

They are good at problem-solving, and tend to be logical in their thinking.

They may have a strong interest in justice, and can be quite determined when they set their mind to something.

Answer: The Snoop Personality is the name given to the common psychological profile of people who are excessively curious and have a compulsive need to know about everything and everyone around them.

People with a Snoop Personality are often characterized as being gossips, nosy parkers, and busybodies who can’t help but put their noses in other people’s business.

They derive satisfaction from learning about others’ personal lives, and derive a sense of power from knowing things that other people don’t.

The Snoop Personality can be harmful because it can lead to social isolation and gossiping, which can ruin relationships.

It’s also important to note that the Snoop Personality is different from healthy curiosity, which is simply a desire to know more.

The Sherlock Holmes personality is one that is curious, analytical, and oftentimes very capacity for forming quick and accurate deductions.

Those with this personality type tend to be some of the most calculative people in any given room – always noticing the small details that others tend to miss.

The Sherlock Holmes personality is one of extreme intelligence, unmatched deductive abilities, and a single-minded focus.

He is able to see connections and patterns that others miss, and his storehouse of knowledge allows him to make deductions that others would never think of.

Sherlock Holmes is a force to be reckoned with, both in his professional life as a detective and in his personal life as an individual.

He is confident and self assured, always sure of himself and his abilities.

This can sometimes come across as arrogant, but it is simply confidence, not arrogance.

Sherlock Holmes personality is also very charming when he wants to be, and can be quite persuasive when he sets his mind to it.

The private investigator personality is usually very independent and resourceful.

They’re often very good at problem solving and are very analytical in their thinking.

Due to the nature of their work, private investigators often have to be able to deal with difficult and stressful situations, so they need to have a strong sense of self-confidence and be able to stay calm under pressure.

They also need to be good at keeping secrets, as much of their work involves confidential information.

The Profiler Personality is a psychological term used to describe someone who has the need to understand people and their motives.

They are often detectives, therapists, or forensic scientists.

They are very curious about human behavior and want to figure out why people do the things they do.

They have an intuitive sense about people and can usually read them very well.

They tend to be good listeners and are often able to get people to open up and share their secrets.

They are also very good at solving puzzles and piecing together clues.

They make great detectives because they have the ability to see the big picture and connect the dots between seemingly unrelated facts.

When it comes to fighting for justice or protecting the innocent, this personality type tends to have a strong sense of right and wrong and are very mission-driven.

These personality types usually have strong moral compass dances; they believe in defending the weak and innocent and in punishing those who break the law or cause harm.

Read on to learn more about the key Detective personality characteristics:

1. The ability to talk to people

The ability to talk to people is one of the most important personality traits of the Detective.

It allows for relationship building, communication, and collaboration with others.

If you can’t talk to people, it’s going to be difficult to achieve any goals in life.

There are a few key things that you need to do in order to be an effective communicator.

First, you need to be able to listen.

It’s not enough just to hear what someone is saying; you need to be able actively listen and understand their perspective.

This involves paying attention, asking clarifying questions, and being open-minded.

Secondly, you need to be able to express yourself clearly.

This means having well-developed verbal skills.

Detective personality with this personality trait are usually good at puzzles, memory games, and other activities that require attention to detail.

They are also often good at problem-solving and understanding complex systems.

Detective personality has ability to to pick up on small details that others might miss.

For some people, having an attention to detail personality means being very organized and systematic in their approach to tasks.

They might like everything to be in its rightful place and get bothered when things are out of order.

Others who pay close attention to detail might excel at art or music, noticing tiny nuances that add up to create a whole picture or sound.

4. Ability to “think outside the box”

Our preconceived notions of what is and isn’t possible – what can be done and what cannot – form “the box” that confines our thinking and our awareness.

Also, it is difficult to come up with innovative solutions to problems if we focus on the negative rather than the positive aspects of the situation.

To “think outside the box” is to go past the obvious and consider possibilities that aren’t immediately apparent.

Having a positive mindset implies being optimistic about your surroundings, your relationships, and your own well-being.

People who have optimistic outlooks are able to find the silver lining in even the most challenging circumstances.

Stubbornness and tenacity are sometimes confused.

A major distinction exists, though.

Stubbornness is a character flaw characterized by a refusal to consider other viewpoints.

Tenacity is a quality characterized by a refusal to give up until one’s goals have been met.

Being stubborn means holding to what you know, but being tenacious means pushing ahead slowly.

Developing a sense of integrity might be difficult since it requires you to step away from the circumstance.

This does not imply that you lack integrity; we all have prejudices because of our upbringing. However, it is your capacity to detect and avoid these prejudices that is the most crucial element.

Examples of the Detective Personality

Here are some examples of the Detective Personality in popular culture and literature: